“Who Are We? The Independent School Library: A Statistical Profile” Susan Williamson

Who Are We? The Independent School Library: A Statistical Profile, a chapter by Susan Williamson presents a statistical picture of a sample of independent school libraries in the United States based on a survey in 2004-2005 conducted by the Independent School Section of AASL. The profile compares libraries on the basis of schools’ student and faculty sizes, collection sizes, budgets, staffing, hours open, facilities, and access to technology. Data from three main categories of school groups (Independent, Independent Religious, and Religious) and school types (Day, Boarding, and Combined Day and Boarding) are analyzed and then compared with data from the recent AASL longitudinal survey of public and private schools. The ISS sample of libraries which consists largely of NAIS members appears to provide greater resources, more open hours and more access to databases than public schools.

In addition, studies from NCES and NAIS comparing public and private school

This is a chapter in the recently published book Independent School Libraries: Perspectives on Excellence published by Libraries Unlimited – see http://www.islpe.org/ for details.

There are summaries of each of the chapters including references and recommended resources supporting each chapter via The Essays page of the above website. 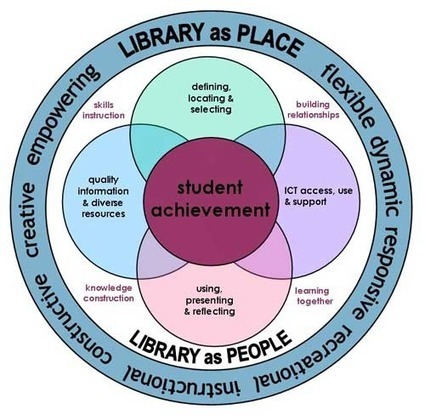 Some of my Student Learning project findings are featured on the National Library of New Zealand’s Services to Schools website in section on the Learner Voices.  It states:

“Listening to our students and incorporating learner voices into the many layers of data that informs our practice, ensures that we are delivering the best possible service. Tuning in to learner voices ensures that the school library is responsive and relevant to student needs…

What are students telling us about school libraries? …over 99% of students reported that their school libraries had helped them with their learning in some way.  In analysing the qualitative data in the Australian research, Hay found the following were key factors:

* seamless integration of ICT between home and school

* access to the library before, after and during school hours

The top three areas that students identified as most helpful in the closed question area of the study were:

Further reading on this study which was the largest Australian survey of school students about how school libraries support their learning, can be found in these articles:

Is The Library Important? Multivariate Studies at the National and International Level

Via Scoop.it – Student Learning through School Libraries
Research has shown that more access to books results in more reading and more reading leads to better literacy development. A new study on the impact of libraries on reading achievement by Stephen Krashen and colleagues using NAEP reading scores and PIRLS (Progress in International Reading Literacy Study) data. Three multivariate analyses, all controlling for the effects of poverty, confirm the importance of the library.

“In all of the multivariate studies considered here the library emerges as a consistent predictor of reading scores… Of course, providing access is only the first step: Even with access, some children (but surprisingly few) will not read. The research literature consistently indicates that rewards for reading are not effective (McQuillan, 1997; Krashen, 2003; 2004), but that read-alouds and conferencing do help. But in order for these approaches to work, the books need to be there.

But what is clear is that libraries definitely matter and they matter a lot.

Inspection of the betas in the tables reveals that access to books in some cases had a larger impact on reading achievement test scores than poverty (tables 1,3, 4), and in other cases had nearly as strong an impact (tables 2,5). This suggests that providing more access to books can mitigate the effect of poverty on reading achievement, a conclusion consistent with other recent results (Achterman, 2008; Evans, Kelley, Sikora, and Treiman, 2010; Schubert and Becker, 2010). This result is of enormous practical importance: Children of poverty typically have little access to books (Krashen, 2004). It seems that libraries can provide this access.”

Here’s the link to a copy of the pdf version of this research paper Is The Library Important? Multivariate Studies at the National and International Level.

You might also want to keep an eye on Jeff McQuillan’s new blog The Backseat Linguist. Jeff is a former university professor of applied linguistics and education, and now a Senior Research Associate at the Center for Educational Development in Los Angeles, California.

Lisa Oldham, Development specialist for school library futures at the National Library of New Zealand, discusses the future of school libraries with EDtalks.

Lisa describes how school libraries are a great way to achieve the creation of skilled students who are able to navigate in the knowledge economy. I particularly like the way Lisa details the information specialist and teaching roles of the teacher librarian in schools. An excellent 7 minute video for professional learning in schools regarding the contribution school libraries make to student learning.

Below is an extract of an article from the Sydney Morning Herald of April 2 2009.

The US software colossus said that on October 31 it would turn off all its Encarta websites everywhere except in Japan, with that service to be terminated on the last day of December.

“The category of traditional encyclopedias and reference material has changed,” Microsoft said in an online message at its Encarta website on Monday.

“People today seek and consume information in considerably different ways than in years past.”

Encarta was launched in 1993 as competition for traditional reference books such as those offered by Encyclopedia Britannica.

Encarta was originally available for purchase as a multimedia computer resource in DVD-ROM or CD-ROM formats and eventually became available online on a subscription basis.

While Wikipedia lets users continually update or refine entries, improvements suggested to Encarta must pass muster with editors before eventually being incorporated into the data base.”

This raises a number of issues that are of importance to teacher librarians.  Wikipedia is a tool and can have a place in locating information but it is information that cannot be relied upon.  The content is created by people of unknown authority and anyone can edit the information.  This has lead to inorrect and misleading information being posted on Wikipedia and there have been famous incidents of this being reported in news media.  Usually it has surrounded information on politicians being changed during election times.

So where does Wikipedia fit in the teaching process?  This is something that TLs must consider carefully.  Is it to be used as a site to gain some general information about a subject?  Is it to be used at all?  Do students and teachers understand what Wikipedia actually is or do they think it is as good and as authorative as Encyclopedia Britannica?

Now that Encarta is being closed down, where else can schools go online to find an authorative encyclopedia?

If you use another online encyclopedic source, please comment here and let us know why you use it.  If you use Wikipedia, how and why do you use it?  Do you think it is a resource has a place in schools or should we ‘exclude’ it as not being a useful resource?

School students know what they want from their school library. Just ask 11 year old Jamaican student, Daniella who wrote a letter outlining why her school library needed to be the winner of a $100,000 donation from a local bank.

This story is a great example of the use of ‘student voice’ as advocates of change with regard to the resourcing of school libraries to support student learning.

This is supported by recent research such as the Ohio Study (by Todd & Kuhlthau (2004) and the Australian replication of this study by Hay (2006). Based on over 6, 700 student responses to the Australian School Libraries Supporting Student Learning survey from 46 primary and secondary schools, my article in Scan (Vol 25, No 2 – May 2006) presents the findings of this research project, and concludes that students want their school libraries to be “flexible and dynamic learning laboratories”.

This Jamaican newspaper item demonstrates that Jamaican kids (just like Aussie kids) also have a vision of how their school library can contribute to their learning. School Libraries Work (3rd ed, 2008) states, “A school library program that is adequately staffed, resourced, and funded can lead to higher student achievement regardless of the socioeconomic or educational levels of the community.” (p.10). We look forward to hearing more stories about students who become advocates of change for their school library and student communities.